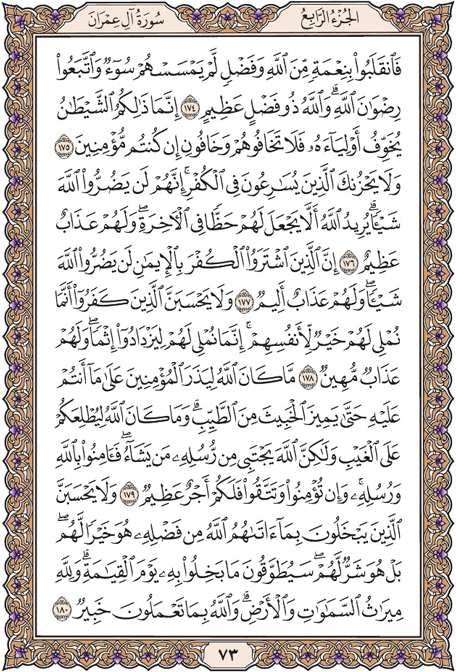 So they returned with favor from Allah and bounty, no harm having touched them. And they pursued the pleasure of Allah , and Allah is the possessor of great bounty.

That is only Satan who frightens [you] of his supporters. So fear them not, but fear Me, if you are [indeed] believers.

And do not be grieved, [O Muúammad], by those who hasten into disbelief. Indeed, they will never harm Allah at all. Allah intends that He should give them no share in the Hereafter, and for them is a great punishment.

Indeed, those who purchase disbelief [in exchange] for faith - never will they harm Allah at all, and for them is a painful punishment.

And let not those who disbelieve ever think that [because] We extend their time [of enjoyment] it is better for them. We only extend it for them so that they may increase in sin, and for them is a humiliating punishment.

Allah would not leave the believers in that [state] you are in [presently] until He separates the evil from the good. Nor would Allah reveal to you the unseen. But [instead], Allah chooses of His messengers whom He wills, so believe in Allah and His messengers. And if you believe and fear Him, then for you is a great reward.

And let not those who [greedily] withhold what Allah has given them of His bounty ever think that it is better for them. Rather, it is worse for them. Their necks will be encircled by what they withheld on the Day of Resurrection. And to Allah belongs the heritage of the heavens and the earth. And Allah , with what you do, is [fully] Acquainted.