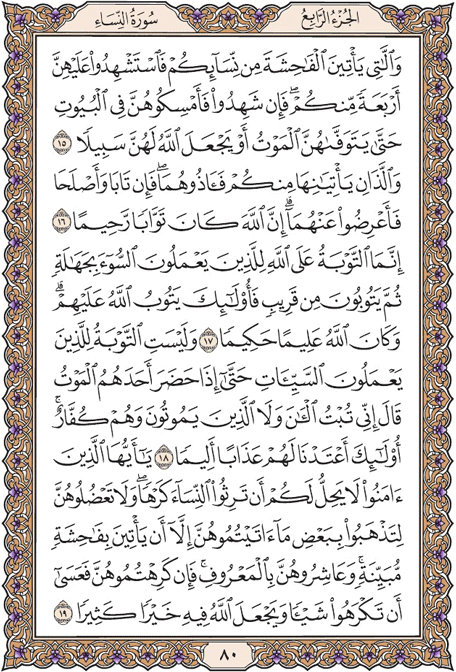 Those who commit unlawful sexual intercourse of your women - bring against them four [witnesses] from among you. And if they testify, confine the guilty women to houses until death takes them or Allah ordains for them [another] way.

And the two who commit it among you, dishonor them both. But if they repent and correct themselves, leave them alone. Indeed, Allah is ever Accepting of repentance and Merciful.

The repentance accepted by Allah is only for those who do wrong in ignorance [or carelessness] and then repent soon after. It is those to whom Allah will turn in forgiveness, and Allah is ever Knowing and Wise.

But repentance is not [accepted] of those who [continue to] do evil deeds up until, when death comes to one of them, he says, |Indeed, I have repented now,| or of those who die while they are disbelievers. For them We have prepared a painful punishment.

O you who have believed, it is not lawful for you to inherit women by compulsion. And do not make difficulties for them in order to take [back] part of what you gave them unless they commit a clear immorality. And live with them in kindness. For if you dislike them - perhaps you dislike a thing and Allah makes therein much good.