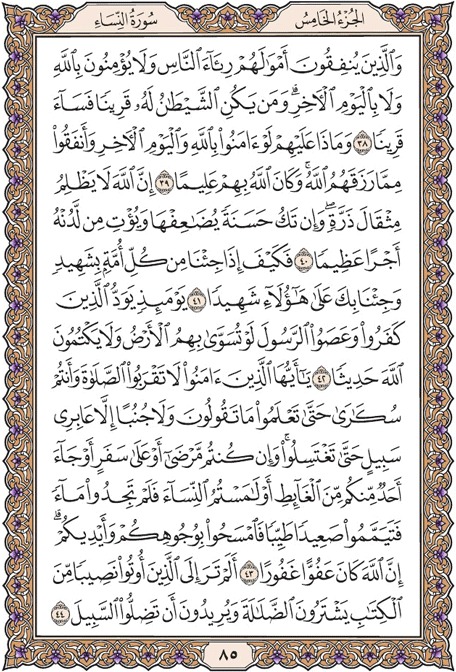 And [also] those who spend of their wealth to be seen by the people and believe not in Allah nor in the Last Day. And he to whom Satan is a companion - then evil is he as a companion.

And what [harm would come] upon them if they believed in Allah and the Last Day and spent out of what Allah provided for them? And Allah is ever, about them, Knowing.

Indeed, Allah does not do injustice, [even] as much as an atom's weight; while if there is a good deed, He multiplies it and gives from Himself a great reward.

So how [will it be] when We bring from every nation a witness and we bring you, [O Muúammad] against these [people] as a witness?

That Day, those who disbelieved and disobeyed the Messenger will wish they could be covered by the earth. And they will not conceal from Allah a [single] statement.

O you who have believed, do not approach prayer while you are intoxicated until you know what you are saying or in a state of janabah, except those passing through [a place of prayer], until you have washed [your whole body]. And if you are ill or on a journey or one of you comes from the place of relieving himself or you have contacted women and find no water, then seek clean earth and wipe over your faces and your hands [with it]. Indeed, Allah is ever Pardoning and Forgiving.

Have you not seen those who were given a portion of the Scripture, purchasing error [in exchange for it] and wishing you would lose the way?