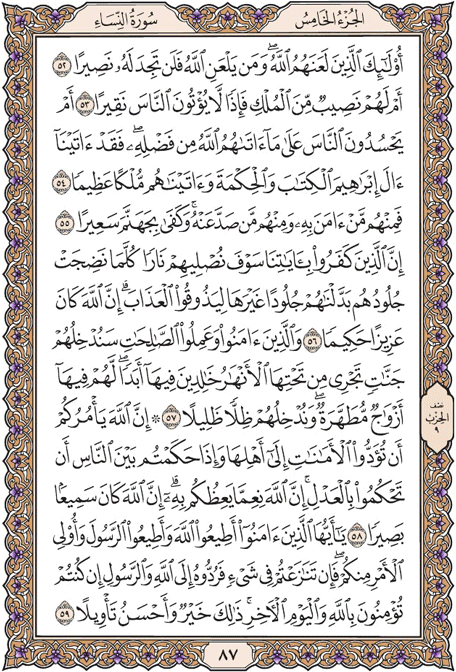 Those are the ones whom Allah has cursed; and he whom Allah curses - never will you find for him a helper.

Or have they a share of dominion? Then [if that were so], they would not give the people [even as much as] the speck on a date seed.

Or do they envy people for what Allah has given them of His bounty? But we had already given the family of Abraham the Scripture and wisdom and conferred upon them a great kingdom.

Indeed, those who disbelieve in Our verses - We will drive them into a Fire. Every time their skins are roasted through We will replace them with other skins so they may taste the punishment. Indeed, Allah is ever Exalted in Might and Wise.

Indeed, Allah commands you to render trusts to whom they are due and when you judge between people to judge with justice. Excellent is that which Allah instructs you. Indeed, Allah is ever Hearing and Seeing.

O you who have believed, obey Allah and obey the Messenger and those in authority among you. And if you disagree over anything, refer it to Allah and the Messenger, if you should believe in Allah and the Last Day. That is the best [way] and best in result.