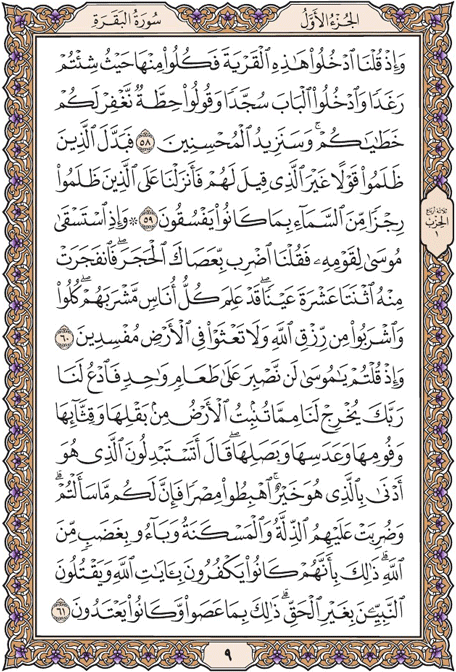 And [recall] when We said, |Enter this city and eat from it wherever you will in [ease and] abundance, and enter the gate bowing humbly and say, 'Relieve us of our burdens.' We will [then] forgive your sins for you, and We will increase the doers of good [in goodness and reward].

And [recall] when Moses prayed for water for his people, so We said, |Strike with your staff the stone.| And there gushed forth from it twelve springs, and every people knew its watering place. |Eat and drink from the provision of Allah , and do not commit abuse on the earth, spreading corruption.

And [recall] when you said, |O Moses, we can never endure one [kind of] food. So call upon your Lord to bring forth for us from the earth its green herbs and its cucumbers and its garlic and its lentils and its onions.| [Moses] said, |Would you exchange what is better for what is less? Go into [any] settlement and indeed, you will have what you have asked.| And they were covered with humiliation and poverty and returned with anger from Allah [upon them]. That was because they [repeatedly] disbelieved in the signs of Allah and killed the prophets without right. That was because they disobeyed and were [habitually] transgressing.