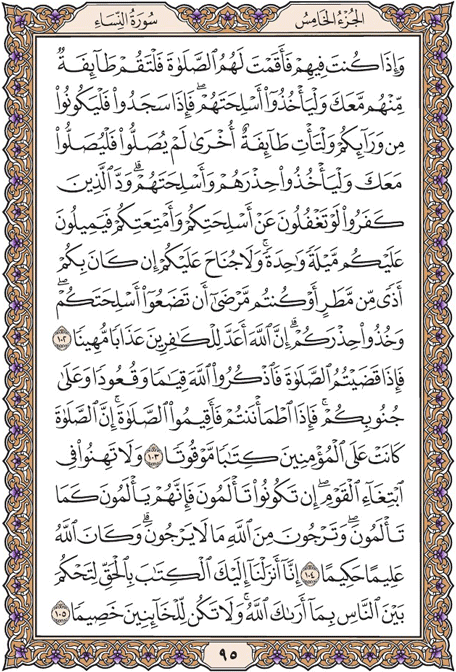 And when you are among them and lead them in prayer, let a group of them stand [in prayer] with you and let them carry their arms. And when they have prostrated, let them be [in position] behind you and have the other group come forward which has not [yet] prayed and let them pray with you, taking precaution and carrying their arms. Those who disbelieve wish that you would neglect your weapons and your baggage so they could come down upon you in one [single] attack. But there is no blame upon you, if you are troubled by rain or are ill, for putting down your arms, but take precaution. Indeed, Allah has prepared for the disbelievers a humiliating punishment.

And when you have completed the prayer, remember Allah standing, sitting, or [lying] on your sides. But when you become secure, re-establish [regular] prayer. Indeed, prayer has been decreed upon the believers a decree of specified times.

And do not weaken in pursuit of the enemy. If you should be suffering - so are they suffering as you are suffering, but you expect from Allah that which they expect not. And Allah is ever Knowing and Wise.

Indeed, We have revealed to you, [O Muúammad], the Book in truth so you may judge between the people by that which Allah has shown you. And do not be for the deceitful an advocate.