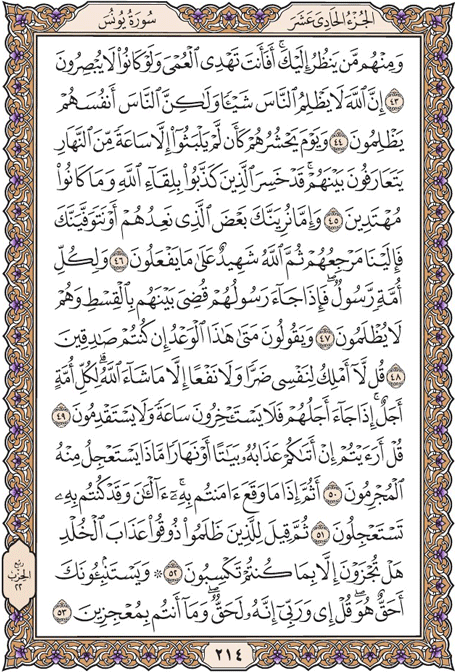 And among them are those who look at you. But can you guide the blind although they will not [attempt to] see?

Indeed, Allah does not wrong the people at all, but it is the people who are wronging themselves.

And on the Day when He will gather them, [it will be] as if they had not remained [in the world] but an hour of the day, [and] they will know each other. Those will have lost who denied the meeting with Allah and were not guided

And whether We show you some of what We promise them, [O Muúammad], or We take you in death, to Us is their return; then, [either way], Allah is a witness concerning what they are doing

And for every nation is a messenger. So when their messenger comes, it will be judged between them in justice, and they will not be wronged

And they say, |When is [the fulfillment of] this promise, if you should be truthful?|

Say, |I possess not for myself any harm or benefit except what Allah should will. For every nation is a [specified] term. When their time has come, then they will not remain behind an hour, nor will they precede [it].

Say, |Have you considered: if His punishment should come to you by night or by day - for which [aspect] of it would the criminals be impatient?|

Then is it that when it has [actually] occurred you will believe in it? Now? And you were [once] for it impatient

Then it will be said to those who had wronged, |Taste the punishment of eternity; are you being recompensed except for what you used to earn?|

And they ask information of you, [O Muúammad], |Is it true?| Say, |Yes, by my Lord. Indeed, it is truth; and you will not cause failure [to Allah ].