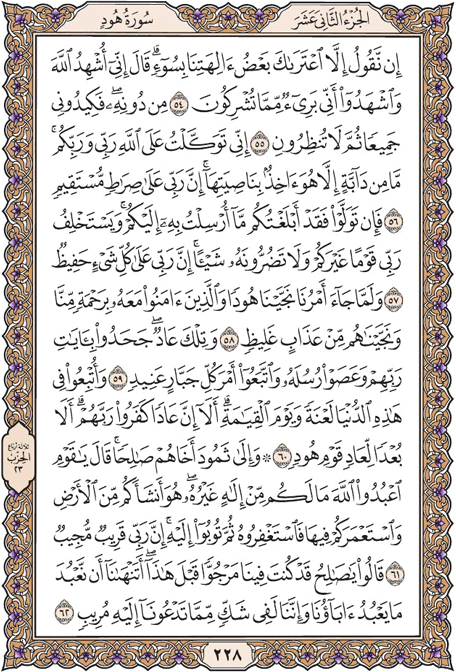 We only say that some of our gods have possessed you with evil.| He said, |Indeed, I call Allah to witness, and witness [yourselves] that I am free from whatever you associate with Allah

Other than Him. So plot against me all together; then do not give me respite.

Indeed, I have relied upon Allah , my Lord and your Lord. There is no creature but that He holds its forelock. Indeed, my Lord is on a path [that is] straight.

But if they turn away, [say], |I have already conveyed that with which I was sent to you. My Lord will give succession to a people other than you, and you will not harm Him at all. Indeed my Lord is, over all things, Guardian.

And when Our command came, We saved Hud and those who believed with him, by mercy from Us; and We saved them from a harsh punishment.

And that was 'Aad, who rejected the signs of their Lord and disobeyed His messengers and followed the order of every obstinate tyrant.

And they were [therefore] followed in this world with a curse and [as well] on the Day of Resurrection. Unquestionably, 'Aad denied their Lord; then away with 'Aad, the people of Hud.

And to Thamud [We sent] their brother êaliú. He said, |O my people, worship Allah ; you have no deity other than Him. He has produced you from the earth and settled you in it, so ask forgiveness of Him and then repent to Him. Indeed, my Lord is near and responsive.

They said, |O êaliú, you were among us a man of promise before this. Do you forbid us to worship what our fathers worshipped? And indeed we are, about that to which you invite us, in disquieting doubt.