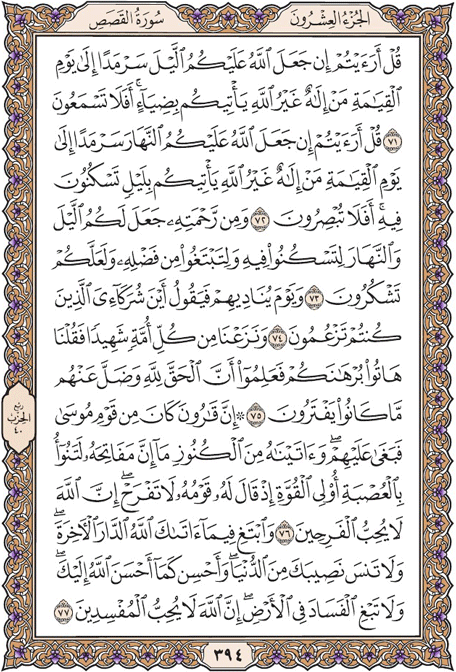 Say, |Have you considered: if Allah should make for you the night continuous until the Day of Resurrection, what deity other than Allah could bring you light? Then will you not hear?|

Say, |Have you considered: if Allah should make for you the day continuous until the Day of Resurrection, what deity other than Allah could bring you a night in which you may rest? Then will you not see?|

And out of His mercy He made for you the night and the day that you may rest therein and [by day] seek from His bounty and [that] perhaps you will be grateful.

And [warn of] the Day He will call them and say, |Where are my 'partners' which you used to claim?|

And We will extract from every nation a witness and say, |Produce your proof,| and they will know that the truth belongs to Allah , and lost from them is that which they used to invent.

Indeed, Qarun was from the people of Moses, but he tyrannized them. And We gave him of treasures whose keys would burden a band of strong men; thereupon his people said to him, |Do not exult. Indeed, Allah does not like the exultant.

But seek, through that which Allah has given you, the home of the Hereafter; and [yet], do not forget your share of the world. And do good as Allah has done good to you. And desire not corruption in the land. Indeed, Allah does not like corrupters.