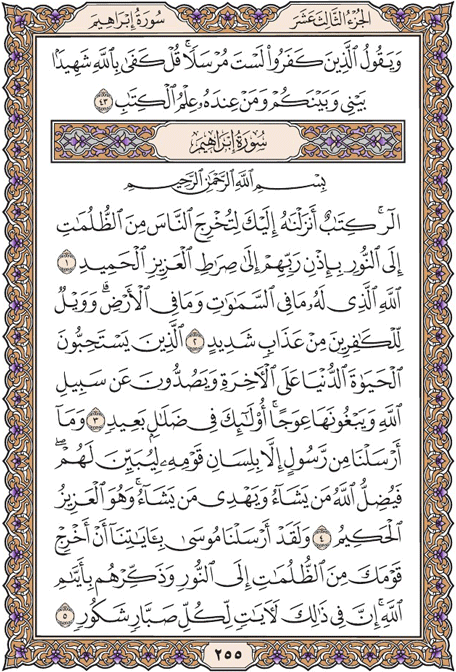 And those who have disbelieved say, |You are not a messenger.| Say, [O Muúammad], |Sufficient is Allah as Witness between me and you, and [the witness of] whoever has knowledge of the Scripture.

Alif, Lam, Ra. [This is] a Book which We have revealed to you, [O Muúammad], that you might bring mankind out of darknesses into the light by permission of their Lord - to the path of the Exalted in Might, the Praiseworthy -

Allah , to whom belongs whatever is in the heavens and whatever is on the earth. And woe to the disbelievers from a severe punishment

The ones who prefer the worldly life over the Hereafter and avert [people] from the way of Allah , seeking to make it (seem) deviant. Those are in extreme error.

And We did not send any messenger except [speaking] in the language of his people to state clearly for them, and Allah sends astray [thereby] whom He wills and guides whom He wills. And He is the Exalted in Might, the Wise.

And We certainly sent Moses with Our signs, [saying], |Bring out your people from darknesses into the light and remind them of the days of Allah .| Indeed in that are signs for everyone patient and grateful.