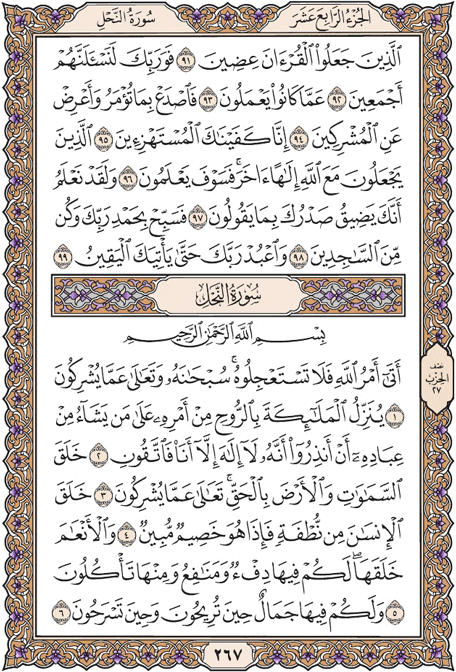 Who have made the Qur'an into portions.

So by your Lord, We will surely question them all

About what they used to do.

Then declare what you are commanded and turn away from the polytheists.

Indeed, We are sufficient for you against the mockers

Who make [equal] with Allah another deity. But they are going to know.

And We already know that your breast is constrained by what they say.

So exalt [ Allah ] with praise of your Lord and be of those who prostrate [to Him].

And worship your Lord until there comes to you the certainty (death).

The command of Allah is coming, so be not impatient for it. Exalted is He and high above what they associate with Him.

He sends down the angels, with the inspiration of His command, upon whom He wills of His servants, [telling them], |Warn that there is no deity except Me; so fear Me.

He created the heavens and earth in truth. High is He above what they associate with Him.

He created man from a sperm-drop; then at once, he is a clear adversary.

And the grazing livestock He has created for you; in them is warmth and [numerous] benefits, and from them you eat.

And for you in them is [the enjoyment of] beauty when you bring them in [for the evening] and when you send them out [to pasture].