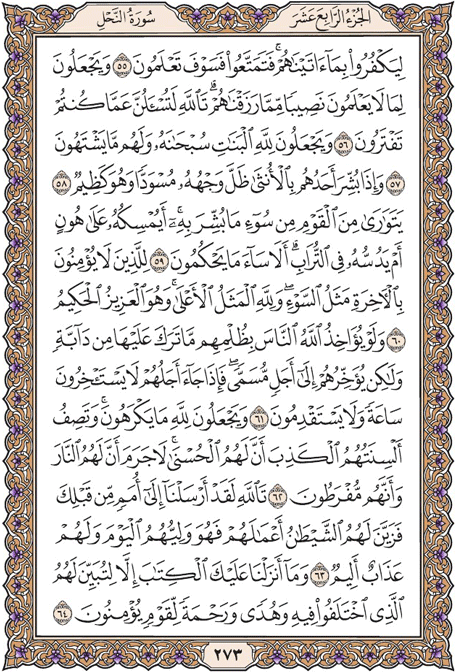 So they will deny what We have given them. Then enjoy yourselves, for you are going to know.

And they assign to what they do not know a portion of that which We have provided them. By Allah , you will surely be questioned about what you used to invent.

And they attribute to Allah daughters - exalted is He - and for them is what they desire.

And when one of them is informed of [the birth of] a female, his face becomes dark, and he suppresses grief.

He hides himself from the people because of the ill of which he has been informed. Should he keep it in humiliation or bury it in the ground? Unquestionably, evil is what they decide.

For those who do not believe in the Hereafter is the description of evil; and for Allah is the highest attribute. And He is Exalted in Might, the Wise.

And if Allah were to impose blame on the people for their wrongdoing, He would not have left upon the earth any creature, but He defers them for a specified term. And when their term has come, they will not remain behind an hour, nor will they precede [it].

By Allah , We did certainly send [messengers] to nations before you, but Satan made their deeds attractive to them. And he is the disbelievers' ally today [as well], and they will have a painful punishment.

And We have not revealed to you the Book, [O Muúammad], except for you to make clear to them that wherein they have differed and as guidance and mercy for a people who believe.