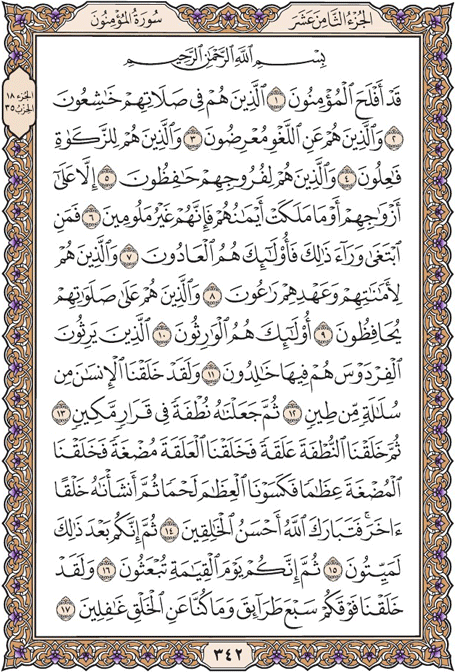 Certainly will the believers have succeeded:

They who are during their prayer humbly submissive

And they who turn away from ill speech

And they who are observant of zakah

And they who guard their private parts

Except from their wives or those their right hands possess, for indeed, they will not be blamed -

But whoever seeks beyond that, then those are the transgressors -

And they who are to their trusts and their promises attentive

And they who carefully maintain their prayers -

Those are the inheritors

Who will inherit al-Firdaus. They will abide therein eternally.

And certainly did We create man from an extract of clay.

Then We placed him as a sperm-drop in a firm lodging.

Then We made the sperm-drop into a clinging clot, and We made the clot into a lump [of flesh], and We made [from] the lump, bones, and We covered the bones with flesh; then We developed him into another creation. So blessed is Allah , the best of creators.

Then indeed, after that you are to die.

Then indeed you, on the Day of Resurrection, will be resurrected.

And We have created above you seven layered heavens, and never have We been of [Our] creation unaware.