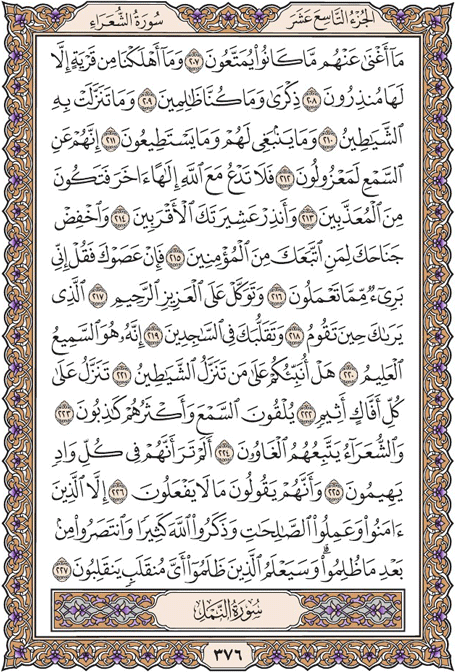 They would not be availed by the enjoyment with which they were provided.

As a reminder; and never have We been unjust.

And the devils have not brought the revelation down.

It is not allowable for them, nor would they be able.

Indeed they, from [its] hearing, are removed.

So do not invoke with Allah another deity and [thus] be among the punished.

And lower your wing to those who follow you of the believers.

And if they disobey you, then say, |Indeed, I am disassociated from what you are doing.

And rely upon the Exalted in Might, the Merciful,

Who sees you when you arise

And your movement among those who prostrate.

Indeed, He is the Hearing, the Knowing.

Shall I inform you upon whom the devils descend?

They descend upon every sinful liar.

They pass on what is heard, and most of them are liars.

Do you not see that in every valley they roam

And that they say what they do not do? -

Except those [poets] who believe and do righteous deeds and remember Allah often and defend [the Muslims] after they were wronged. And those who have wronged are going to know to what [kind of] return they will be returned.