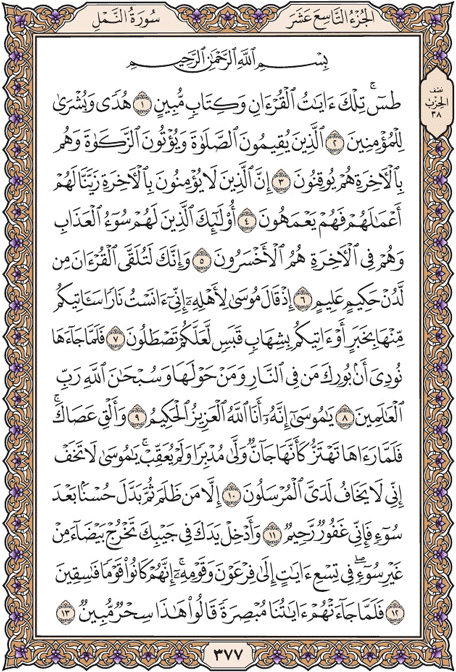 Ta, Seen. These are the verses of the Qur'an and a clear Book

As guidance and good tidings for the believers

Who establish prayer and give zakah, and of the Hereafter they are certain [in faith].

Indeed, for those who do not believe in the Hereafter, We have made pleasing to them their deeds, so they wander blindly.

Those are the ones for whom there will be the worst of punishment, and in the Hereafter they are the greatest losers.

And indeed, [O Muúammad], you receive the Qur'an from one Wise and Knowing.

[Mention] when Moses said to his family, |Indeed, I have perceived a fire. I will bring you from there information or will bring you a burning torch that you may warm yourselves.

But when he came to it, he was called, |Blessed is whoever is at the fire and whoever is around it. And exalted is Allah , Lord of the worlds.

O Moses, indeed it is I - Allah , the Exalted in Might, the Wise.

And [he was told], |Throw down your staff.| But when he saw it writhing as if it were a snake, he turned in flight and did not return. [ Allah said], |O Moses, fear not. Indeed, in My presence the messengers do not fear.

Otherwise, he who wrongs, then substitutes good after evil - indeed, I am Forgiving and Merciful.

And put your hand into the opening of your garment [at the breast]; it will come out white without disease. [These are] among the nine signs [you will take] to Pharaoh and his people. Indeed, they have been a people defiantly disobedient.

But when there came to them Our visible signs, they said, |This is obvious magic.