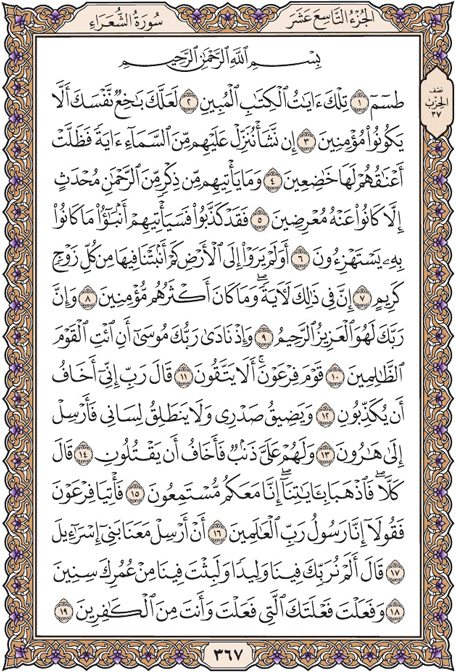 These are the verses of the clear Book.

Perhaps, [O Muúammad], you would kill yourself with grief that they will not be believers.

If We willed, We could send down to them from the sky a sign for which their necks would remain humbled.

And no revelation comes to them anew from the Most Merciful except that they turn away from it.

For they have already denied, but there will come to them the news of that which they used to ridicule.

Did they not look at the earth - how much We have produced therein from every noble kind?

Indeed in that is a sign, but most of them were not to be believers.

And indeed, your Lord - He is the Exalted in Might, the Merciful.

And [mention] when your Lord called Moses, [saying], |Go to the wrongdoing people -

The people of Pharaoh. Will they not fear Allah ?|

He said, |My Lord, indeed I fear that they will deny me

And that my breast will tighten and my tongue will not be fluent, so send for Aaron.

And they have upon me a [claim due to] sin, so I fear that they will kill me.

[ Allah ] said, |No. Go both of you with Our signs; indeed, We are with you, listening.

Go to Pharaoh and say, 'We are the messengers of the Lord of the worlds,

[Commanded to say], |Send with us the Children of Israel.|'|

[Pharaoh] said, |Did we not raise you among us as a child, and you remained among us for years of your life?

And [then] you did your deed which you did, and you were of the ungrateful.