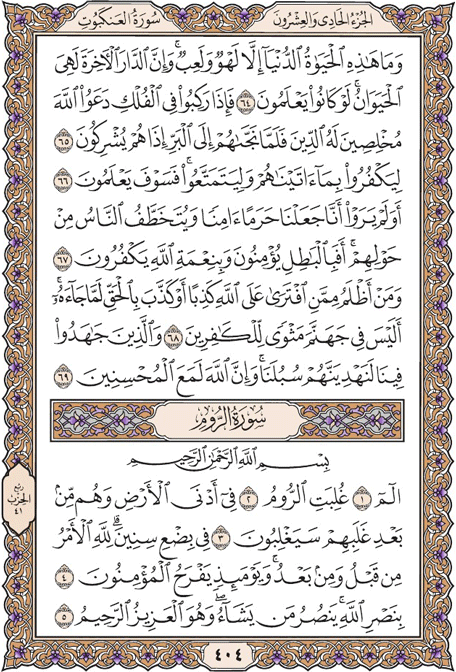 And this worldly life is not but diversion and amusement. And indeed, the home of the Hereafter - that is the [eternal] life, if only they knew.

And when they board a ship, they supplicate Allah , sincere to Him in religion. But when He delivers them to the land, at once they associate others with Him

So that they will deny what We have granted them, and they will enjoy themselves. But they are going to know.

Have they not seen that We made [Makkah] a safe sanctuary, while people are being taken away all around them? Then in falsehood do they believe, and in the favor of Allah they disbelieve?

And who is more unjust than one who invents a lie about Allah or denies the truth when it has come to him? Is there not in Hell a [sufficient] residence for the disbelievers?

And those who strive for Us - We will surely guide them to Our ways. And indeed, Allah is with the doers of good.

The Byzantines have been defeated

In the nearest land. But they, after their defeat, will overcome.

Within three to nine years. To Allah belongs the command before and after. And that day the believers will rejoice

In the victory of Allah . He gives victory to whom He wills, and He is the Exalted in Might, the Merciful.