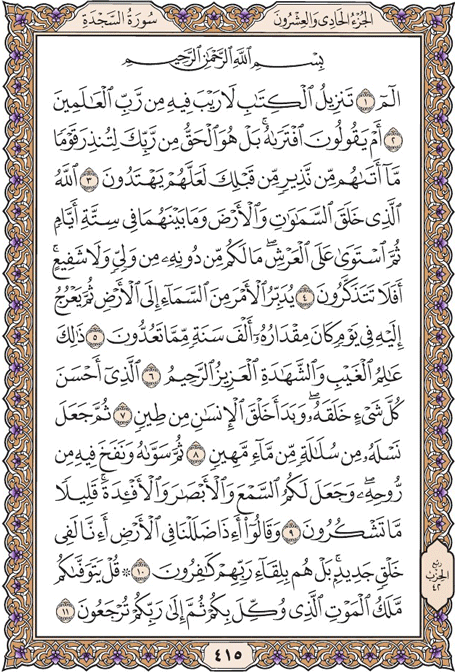 [This is] the revelation of the Book about which there is no doubt from the Lord of the worlds.

Or do they say, |He invented it|? Rather, it is the truth from your Lord, [O Muúammad], that you may warn a people to whom no warner has come before you [so] perhaps they will be guided.

It is Allah who created the heavens and the earth and whatever is between them in six days; then He established Himself above the Throne. You have not besides Him any protector or any intercessor; so will you not be reminded?

He arranges [each] matter from the heaven to the earth; then it will ascend to Him in a Day, the extent of which is a thousand years of those which you count.

That is the Knower of the unseen and the witnessed, the Exalted in Might, the Merciful,

Who perfected everything which He created and began the creation of man from clay.

Then He made his posterity out of the extract of a liquid disdained.

Then He proportioned him and breathed into him from His [created] soul and made for you hearing and vision and hearts; little are you grateful.

And they say, |When we are lost within the earth, will we indeed be [recreated] in a new creation?| Rather, they are, in [the matter of] the meeting with their Lord, disbelievers.

Say, |The angel of death will take you who has been entrusted with you. Then to your Lord you will be returned.