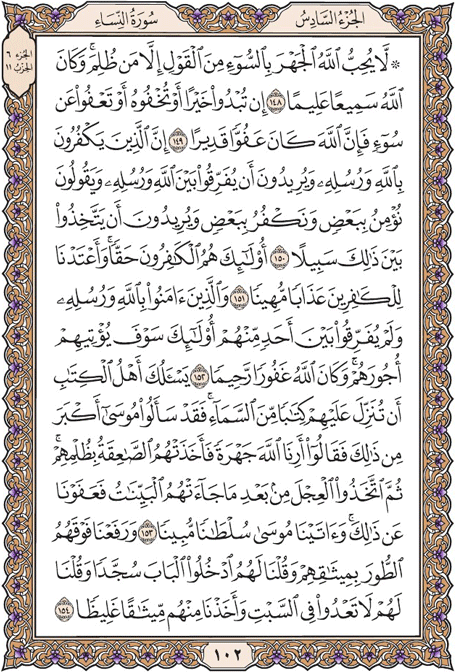 God does not like ill (of others) spoken about, except by him who has been wronged. For God hears all and knows everything.

Whether you do some good openly or in secret, or forgive an ill done to you, (know) that God is forgiving and all-powerful.

Those who believe not in God and His apostles, and desire to differentiate between God and His messengers, and say: "We believe in some and not in the others," and wish to find a way (between affirmation and denial),

Are verily the real unbelievers. And We have reserved for unbelievers an ignominious punishment.

But those who believe in God and His apostles and make no distinction among any of them, will be given by Him their recompense; for God is forgiving and kind.

The people of the Book demand of you to bring for them a book from heaven. But of Moses they had asked a bigger thing, and demanded: "Show us God face to face." They were struck by lightning then as punishment for their wickedness. Even then they made the calf, when clear signs had reached them. Still We forgave them and gave Moses clear authority.

We exalted them on the Mount, and they gave a solemn pledge, and We said to them: "Enter the gates submissively," and told them: "Do not break the Sabbath," and took a solemn pledge from them.