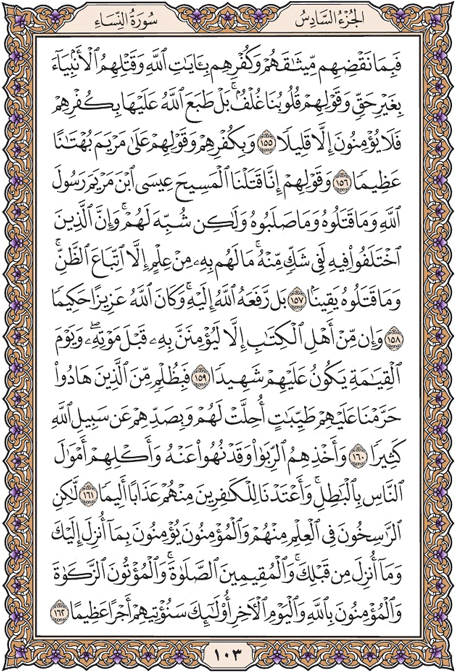 So (they were punished) for breaking the covenant and disbelieving the signs of God, and for killing the prophets unjustly, and saying: "Our hearts are enfolded in covers," (though) in fact God had sealed them because of their unbelief; so they do not believe except a few;

And because they denied and spoke dreadful calumnies of Mary;

And for saying: "We killed the Christ, Jesus, son of Mary, who was an apostle of God;" but they neither killed nor crucified him, though it so appeared to them. Those who disagree in the matter are only lost in doubt. They have no knowledge about it other than conjecture, for surely they did not kill him,

But God raised him up (in position) and closer to Himself; and God is all-mighty and all-wise.

There is not one among the people of the Book who will not believe in it before his death; and he will be a witness over them on the Day of Resurrection.

Because of the wickedness of some among the Jews, and because they obstructed people from the way of God, We forbade them many things which were lawful for them;

And because they practised usury although it had been forbidden them; and for using others' wealth unjustly. For those who are unbelievers among them We have reserved a painful punishment.

But to the learned among them, and the believers who affirm what has been revealed to you and was revealed to those before you, and to those who fulfil their devotional obligations, who pay the zakat and believe in God and the Last Day, We shall give a great reward.