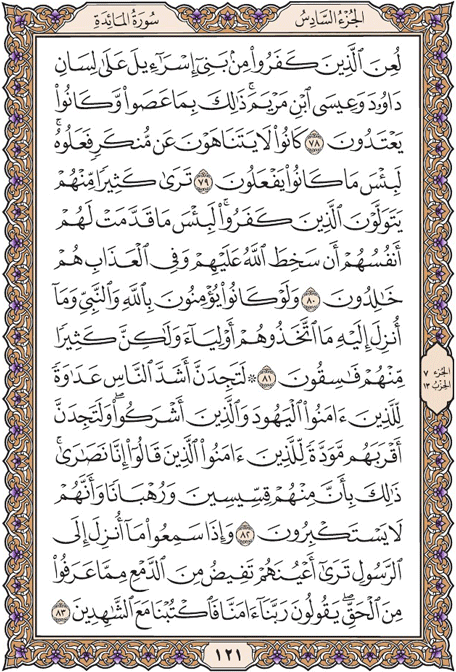 Cursed were disbelievers among the children of Israel by David and Jesus, son of Mary, because they rebelled and transgressed the bounds.

They did not restrain one another from the wicked things they used to do; and vile were the things that they were doing!

You can see among them many allying themselves with the infidels. Vile it was what they sent ahead of them, so that God's indignation came upon them; and torment will they suffer an eternity.

If they had believed in God and the Prophet and what had been revealed to him, they would never have held them as allies; and many among them are transgressors.

You will find the Jews and idolaters most excessive in hatred of those who believe; and the closest in love to the faithful are the people who say: "We are the followers of Christ," because there are priests and monks among them, and they are not arrogant.

For when they listen to what has been revealed to this Apostle, you can see their eyes brim over with tears at the truth which they recognise, and say: "O Lord, we believe; put us down among those who bear witness (to the truth).