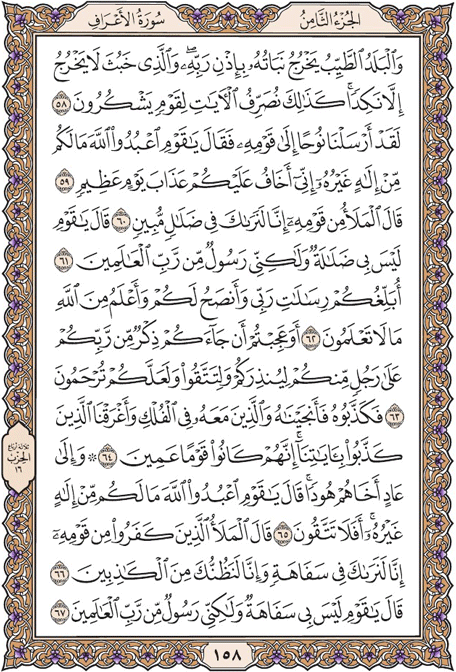 The soil that is good produces (rich) crops by the will of its Lord, and that which is had yields only what is poor. So do We explain Our signs in different ways to people who give thanks.

We sent Noah to his people, and he said: "O people worship God; you have no other god but He; for I fear the retribution of the great Day may fall on you."

The elders of his people replied: "We see clearly that you have gone astray."

"I have not gone astray, O my people," he said, "but have been sent by my Lord, the creator of all the worlds.

I bring to you the messages of my Lord, and give you sincere advice, for I know from God what you do not know.

Do you wonder that a warning has come to you from your Lord through a man who is one of you, and warns you to take heed for yourselves and fear God? You might be treated with mercy."

But they called him a liar, and We saved him and those with him in the Ark, and drowned the others who rejected Our signs, for they were a people purblind.

And We sent Hud, their brother, to the people of 'Ad. He said: "O you people, worship God, for you have no other god but He. Will you not take heed for yourselves?"

The chiefs of his people who were infidels replied: "We find you full of folly, and a liar to boot."

"I am not a fool, O people," he answered, "but have been sent by the Lord of all the worlds.