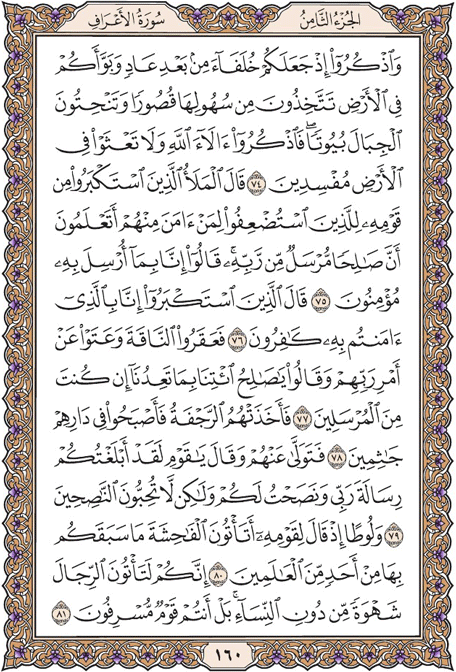 Remember, how you were made leaders after the people of 'Ad, and were settled on the land so that you could construct on the plains palaces, and carve dwellings out of mountains. So think of the favours of God, and do not act with corruption in the land."

The chiefs among the people who were arrogant towards the weaker ones among them who believed, asked: "Do you really know that Saleh has been sent by his Lord?" They said: "Indeed we believe in the message he has brought."

Those who were arrogant answered: "We do not believe in what you believe."

Then they hamstrung the she-camel and rebelled against the command of their Lord, and said: "Bring, O Saleh, on us the affliction you promise, if you are one of the sent ones."

Then they were seized by an earthquake, and lay overturned on the ground in their homes in the morning.

Saleh turned away from them and said: "O my people, I conveyed to you the message of my Lord and warned you; but you do not like those who wish you well."

And We sent Lot, who said to his people: "Why do you commit this lecherous act which none in the world has committed before?

In preference to women you satisfy your lust with men. Indeed you are a people who are guilty of excess."