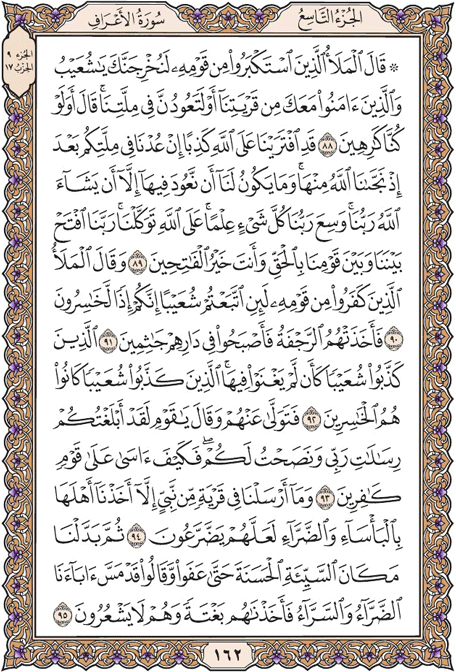 The arrogant leaders of the people replied: "We shall drive you away from our land, O Shu'aib, and those who are with you, unless you come back to your faith." But he remarked: "Even if we are disgusted with it?

We shall only be guilty of blaspheming God if we accept your way after the people of Noah, and gave you a greater increase in your stature. So think of the favours of God; you may haply be blessed."

The chiefs among his people who did not believe said (to them): "If you follow Shu'aib and his way you will surely be ruined."

Then they were seized by an earthquake, and lay overturned on the ground in their homes in the morning.

So Shu'aib turned away from them and said: "O people, I conveyed to you the message of my Lord, and warned you. (But you paid no heed). How can I grieve for a people who do not believe?"

There is not a region to which We sent a prophet and did not inflict upon its people adversity and hardship so that they may submit.

But when We changed hardship to ease, and they rose and prospered, (they forgot Our favours) and said: "Our ancestors had also known suffering and joy." So We caught them unawares.