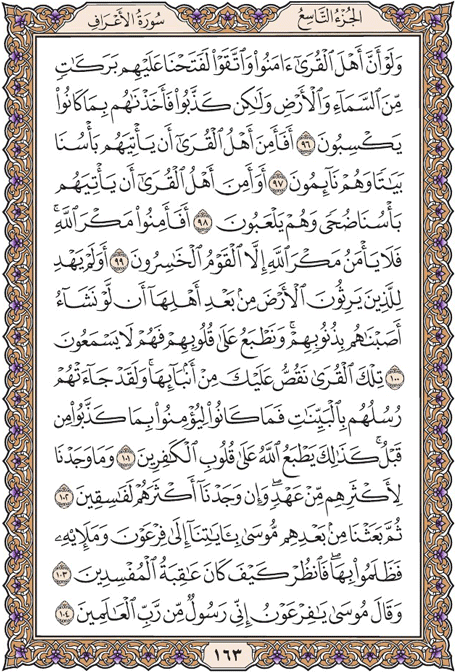 But if the people of these regions had believed and feared God, We would surely have showered on them blessings of the heavens and the earth; but they only denied, and We punished them for their deeds.

Are the people of the region so secure that they lie asleep unaware as Our punishment overtakes them?

Or, are the people of the towns so unafraid that (even when) Our retribution comes upon them in the hours of the morning they remain engrossed in sport and play?

Do not the people who inherited the earth from the (earlier) inhabitants perceive that We could afflict them too for their sins if We pleased, and put seals on their hearts that they may not hear (the voice of truth)?

These were the (earlier) habitations whose accounts We have given to you. Their apostles came with clear proofs, but they did not believe what they once denied. That is how God seals the hearts of those who do not believe.

So We sent Moses with miracles after (these apostles) to the Pharaoh and his nobles, but they behaved with them high-handedly. See then the end of the authors of evil.

Moses said: "O Pharaoh, I have been sent by the Lord of all the worlds;