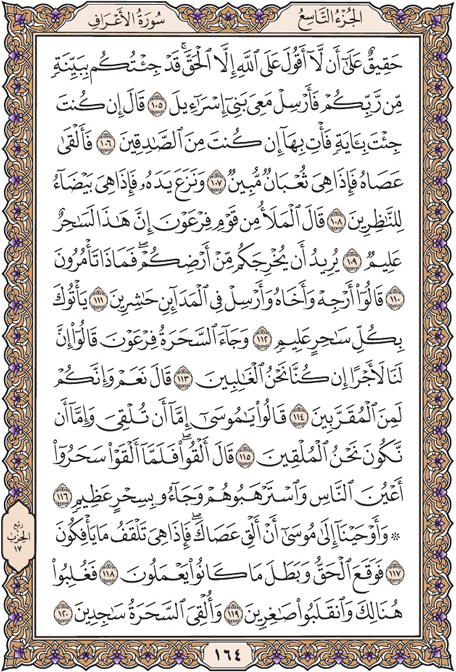 "I am duty bound to speak nothing of God but the truth I have brought from your Lord a clear sign; so let the people of Israel depart with me."

He said: "If you have brought a sign then display it, if what you say is true."

At this Moses threw down his staff, and lo, it became a live serpent.

And he drew forth his hand, and behold, it looked white to those who beheld it.

The nobles of Pharaoh said: "He surely is a clever magician.

"He wishes to drive you away from the land. So what do you advise?"

They said: "Put him and his brother off (awhile) and send out heralds to the cities

"To bring all the wise magicians to you."

The magicians came to the Pharaoh and said: "Is there reward for us if we succeed?"

So they said: "O Moses, you may cast your spell first, or we shall cast ours."

"You cast it first," answered Moses. When they cast their spell, they bewitched the eyes of the people and petrified them by conjuring up a great charm.

We said to Moses: "Throw down your staff;" and it swallowed up their conjurations in no time.

Thus the truth was upheld, and the falsehood that they practised was exposed.

Thus there and then they were vanquished and overthrown, humiliated.

The sorcerers fell to the ground in homage,