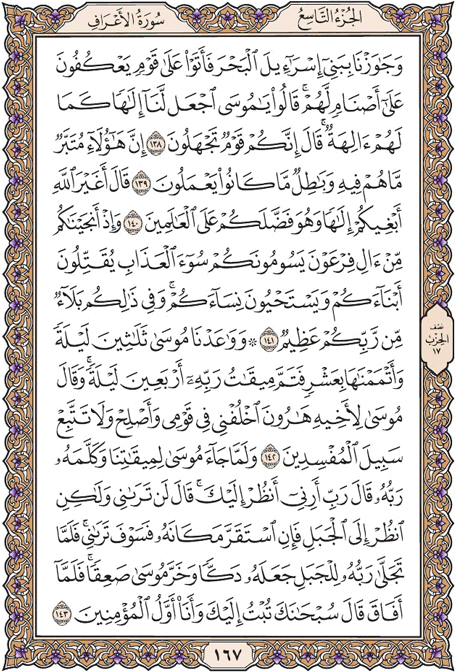 When We brought the children of Israel across the sea, and they came to a people who were devoted to their idols, they said: "O Moses, make us also a god like theirs." "You are ignorant," he replied.

"These people and their ways will surely be destroyed, for false is what they practise.

"Do you want me to seek for you," he said, "a god other than God, when He has exalted you over all the nations of the world?

"Remember (the day) when He saved you from the people of Pharaoh who oppressed and afflicted you, and slew your sons and spared your women. In this was a great trial from your Lord."

We made an appointment of thirty nights with Moses (On Mount Sinai) to which We added ten more; so the term set by the Lord was completed in forty nights. Moses said to Aaron, his brother: "Deputise for me among my people. Dispose rightly, and do not follow the way of the authors of evil."

When Moses arrived at the appointed time and his Lord spoke to him, he said: "O Lord, reveal Yourself to me that I may behold You." "You cannot behold Me," He said. "But look at the mountain: If it remains firm in its place you may then behold Me." But when his Lord appeared on the mountain in His effulgence, it crumbled to a heap of dust, and Moses fell unconscious. When he came to, he said: "All glory to You. I turn to You in repentance, and I am the first to believe."