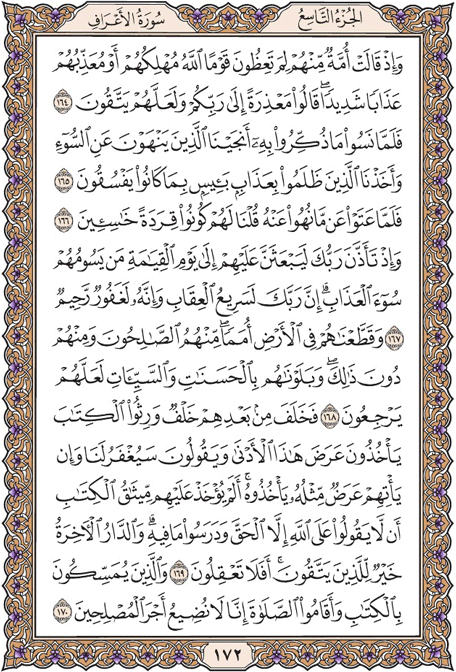 When a Section of them said: "Why do you admonish a people whom God is about to destroy or to punish severely?" They replied: "To clear ourselves of blame before your Lord, and that they may fear God.

But when they forgot to remember the warning, We saved those who prohibited evil, but inflicted on the wicked a dreadful punishment -- requital for their disobedience.

When they persisted in doing what they had been forbidden, We said to them: "Become (like) apes despised."

And your Lord declared He would send men against them who would inflict dreadful suffering on them till the Day of Doom, for your Lord is swift in retribution, though He is certainly forgiving and kind.

We dispersed them in groups over the earth, some righteous, some otherwise; and We tried them with good things and bad, that they may haply turn back.

Then after them a new generation inherited the Book. They took to the things of this base world, and said: "We shall (surely) be forgiven this." Yet they will accept similar things if they came their way again. Had they not been covenanted in the Book to say nothing in the name of God but the truth? And they have read this in it. The abode of the life to come is better for those who fear God. Can they not comprehend?

As for those who adhere to the Book and are firm in devotion, We shall certainly not let the wages of those who are upright to go waste.