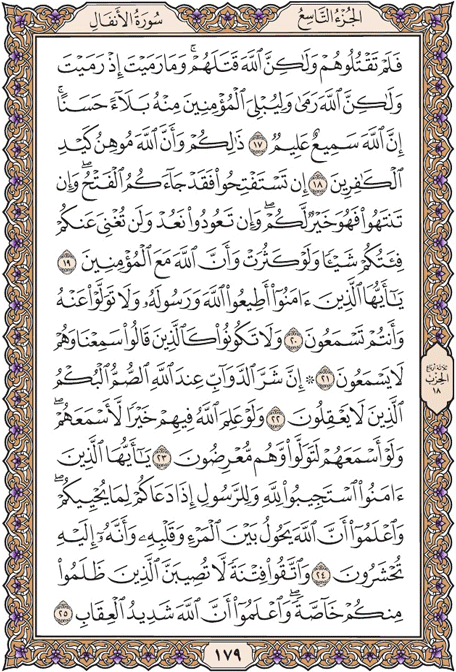 It was not you who killed them, but God did so. You did not throw what you threw, (sand into the eyes of the enemy at Badr), but God, to bring out the best in the faithful by doing them a favour of His own. God is all-hearing and all-knowing.

That was that, but remember God will make the plots of the unbelievers contemptible.

You had asked for a judgement, so the judgement has come to you (In the form of victory for the faithful). So, if you desist it will be better for you. If you come back to it, We shall do the same, and your forces, however large, will not be of the least avail, for God is with those who believe.

O believers, obey God and His Messenger, and do not turn away from him when you hear (him speak);

And do not be like those who say: "We have heard," but do not hear.

The worst of creatures in the eyes of God are those who are deaf and dumb and devoid of sense.

If God had seen any good in them He would surely have made them hear. Now even if He makes them hear they will turn away (in obduracy).

O believers, respond to the call of God and His Prophet when he calls you to what will give you life (and preservation). Remember that God intervenes between man and his heart, and that you will be gathered before Him.

Beware of sedition, which does not affect the oppressors alone among you, and know that the punishment of God is severe.