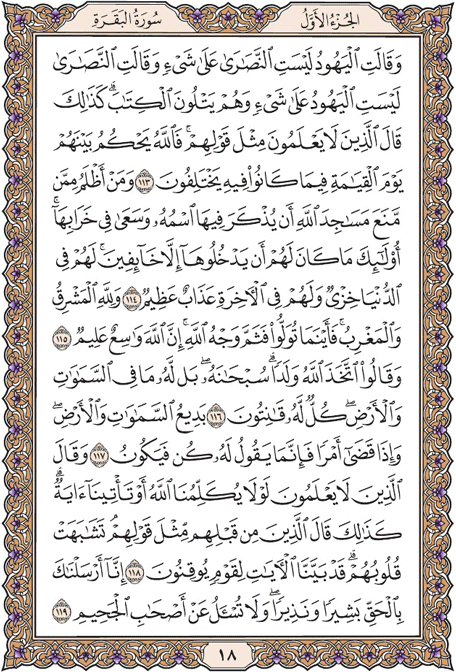 The Jews say: "The Christians are not right," and the Christians say: "The Jews are in the wrong;" yet both read the Scriptures; and this is what the unread had said too. God alone will judge between them in their differences on the Day of Reckoning.

And who is more unjust than he who prohibits the name of God being used in His mosques, who hurries to despoil them even though he has no right to enter them except in reverence? For them is ignominy in the world and severe punishment in the life to come.

To God belong the East and the West. Wherever you turn the glory of God is everywhere: All-pervading is He and all-knowing.

Yet they say that God has begotten a son. May He be praised! Indeed everything in the heavens and the earth belongs to Him, and all are obedient to God.

Creator of the heavens and the earth from nothingness, He has only to say when He wills a thing: "Be", and it is.

But those who are ignorant say: "Why does God not speak or show us a sign?" The same question had been asked by men before them, who were like them in their hearts. But to those who are firm in their faith We have shown Our signs already.

And We have sent you with the truth to give glad tidings and to warn. You will not be questioned about those and who are inmates of Hell.