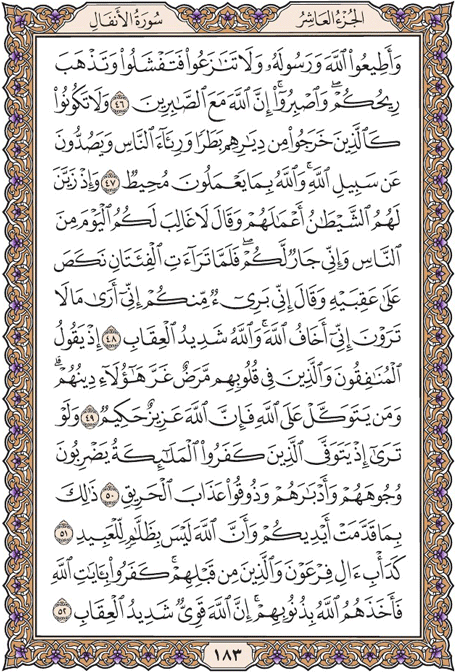 Obey God and His Apostle, and do not disagree among yourselves or you will be unmanned and lose courage. Persevere, for God is with those who endure.

Do not be like those who went out of their homes full of their own importance, ostentatiously, trying to hinder others from the way of God. But God encompasses all they do.

Satan made their deeds look alluring to them, and said: "None will prevail over you this day, for I shall be near at hand." Yet when the two armies appeared face to face, he turned back and fled, saying: "I am not with you, for I can see what you cannot perceive. I fear God, for His punishment is severe."

The hypocrites, and those who had doubts in their hearts, said: "Their faith has misled them." But whoever places his trust in God will find God mighty and wise.

If you could only see the infidels as the angels draw away their souls and strike their faces and their backs, (saying): "Taste the torment of burning

For what you have brought upon yourselves." God is surely not unjust to His creatures, (they are unjust to themselves).

Their case is like that of Pharaoh's people, and of those before them, who denied the revelations of God, and were punished for their sins by God, and God is all powerful and Severe His punishment.