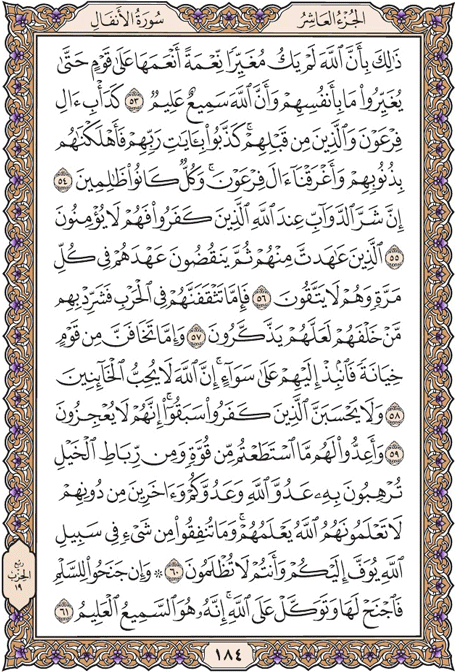 God does not withdraw a favour bestowed upon a people unless they change themselves, for God hears all and knows everything.

Verily the worst of creatures in the sight of God are those who deny (the truth), and will not believe.

As for those with whom you have made a treaty and who abrogate it every time, and do not fear God,

If you meet them in battle, inflict on them such a defeat as would be a lesson for those who come after them, and that they may be warned.

If you apprehend treachery from a people (with whom you have a treaty), retaliate by breaking off (relations) with them, for God does not like those who are treacherous.

The infidels should not think that they can bypass (the law of God). Surely they cannot get away.

Prepare against them whatever arms and cavalry you can muster, that you may strike terror in (the hearts of) the enemies of God and your own, and others besides them not known to you, but known to God. Whatever you spend in the way of God will be paid back to you in full, and no wrong will be done to you.

But if they are inclined to peace, make peace with them, and have trust in God, for He hears all and knows everything.