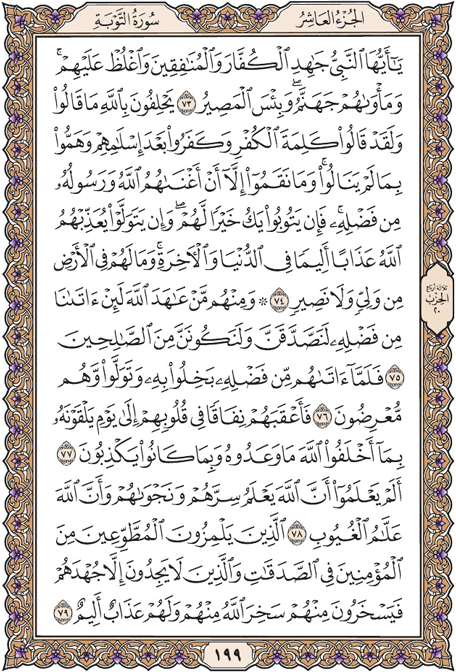 Strive, O Prophet, against the unbelievers and the hypocrites, and deal with them firmly. Their final abode is Hell: And what a wretched destination!

They swear by God: "We never said this." But they surely said words disbelieving the truth, and they turned unbelievers after having come to faith, and designed what they could not accomplish. They did it only out of vengeance for God and His Apostle had enriched them by their grace. So, if they repent it is better for them. If they turn away then God would afflict them with painful punishment in this world and the next; and none will they have on the face of the earth to protect or help them.

Some of them made a covenant with God: "If You give us in Your bounty we shall give alms and be upright."

But when He gave them of His bounty they became greedy, and then turned away.

As a consequence of breaking their promise made to God, and telling lies, he filled their hearts with hypocrisy which will last till the day they come before Him.

Have they not realised that God knows their secrets and their confidential talk, and that God has the knowledge of unknown things?

They who defame those of the believers who give alms willingly, and deride those who have nothing besides what they earn by their labour (to give in charity), will be derided by God, and will suffer painful punishment.