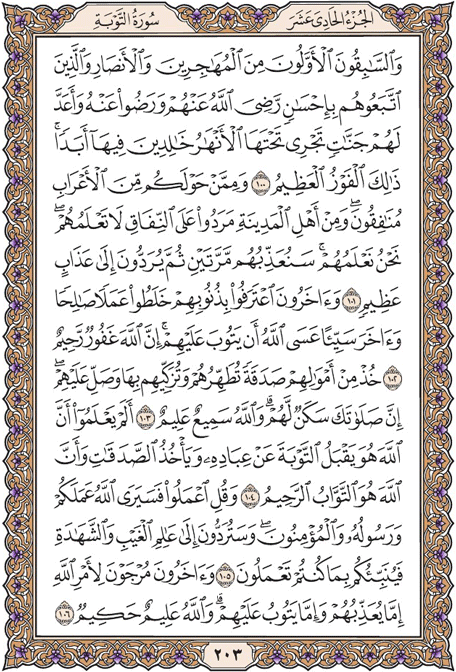 Those among the migrants (from Makkah) and helpers (in Madina) who were the first to believe, and those who followed them in goodness, have been accepted by God and they follow His way. For them He has gardens with streams of running water where they will abide for ever; and that is happiness supreme.

Some of the Arabs of the desert around you are hypocrites, and some of the people of Madina are stubborn in hypocrisy. You are not aware of them; We know them, and will punish them twice, and they will be sent to a harrowing doom.

But there are others who admit their sins of mixing good deeds with evil. It may be that God will accept their repentance, for God is forgiving and kind.

Accept the offerings they make from their wealth in order to cleanse and purify them for progress, and invoke blessings upon them. Your blessings will surely bring them peace, for God hears all and knows everything.

Do they not know that God accepts the repentance of His creatures and receives what they offer in charity, and that He is forgiving and kind?

Say to them: "Act. God will see your conduct, and so will His Apostle and the faithful; for you will in the end go back to Him, who knows the unknown and the known, who will tell you of what you were doing."

There are still some others whose affairs await the dispensation of God. He may punish or pardon them, for God is all-knowing and all-wise.