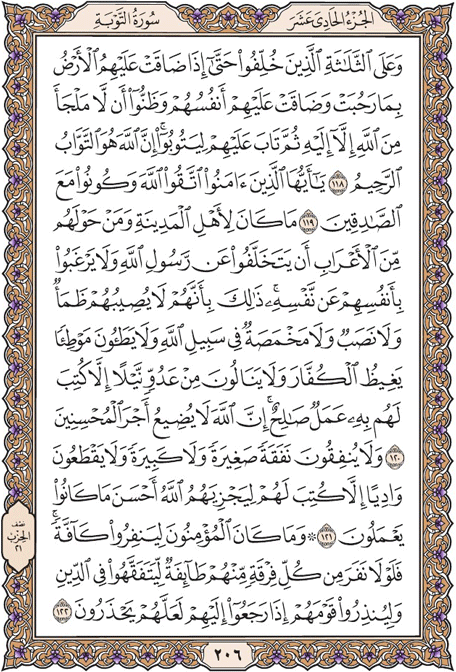 He has relented towards the three also (who had refused to go to the battle of the Ditch) whose case was left undecided, and even the earth with all its expanse had become narrow for them, and their lives were confined, and they came to realise there was no refuge for them except in God. So He softened towards them that they may repent; for God surely accepts repentance and is merciful.

O believers, do not stray from the path of God, and be with those who are truthful.

It was not worthy of the people of Madina, and the Arabs of the desert around them, to abandon the Prophet of God, and to care more for themselves than for him; for there is no hardship or thirst or hunger that they know in the service of God, and no place they walk on where walking provokes the unbelievers, and no harm they receive from the enemy, but is put down as a good deed in their favour. Surely God does not let the recompense of those who do good to go waste.

There is not a sum, large or small, that they spend, not a piece of land that they traverse (in the service of God) which is not put down in their favour, so that God could reward them for what they had done.

It is not possible for all believers to go out (to fight). So a part of each section (of the population) should go (to fight) in order that the others may acquire understanding of law and divinity, and warn their companions on return so that they may take heed for themselves.