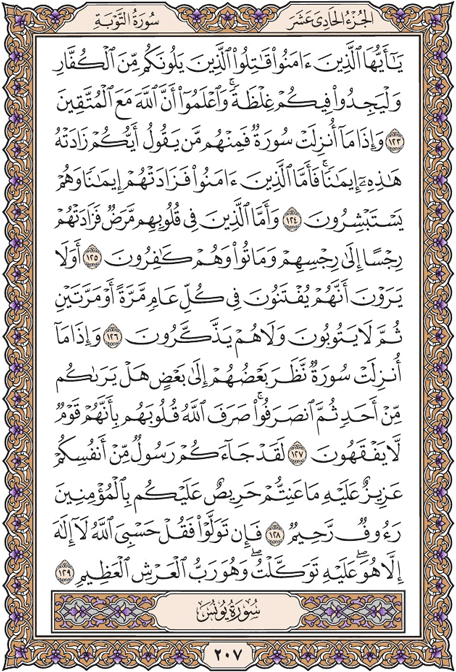 O believers, fight the unbelievers around you, and let them realise that you are firm: Remember, God is with those who are pious and obedient to Him.

When a Surah is revealed some of them remark: "Whose faith among you has it increased?" It does increase the faith of those who believe, and they rejoice.

But it adds disbelief to disbelief for those whose hearts are filled with doubt, and they die disbelieving.

Do they not know that they are tried every year once or twice? Even then they do not repent and take heed.

Whenever a Surah is revealed they look at each other (so as to ask): "Is anyone looking at Us?" and then turn away. Indeed God has turned their hearts away (from the truth), for they cannot discern the law of heaven.

To you has come an Apostle from among you. Any sorrow that befalls you weighs upon him; He is eager for your happiness, full of concern for the faithful, compassionate and kind.

So, if they turn away, say to them: "God is sufficient for me. There is no God but He; I depend on Him alone, the Lord of the glorious Throne."