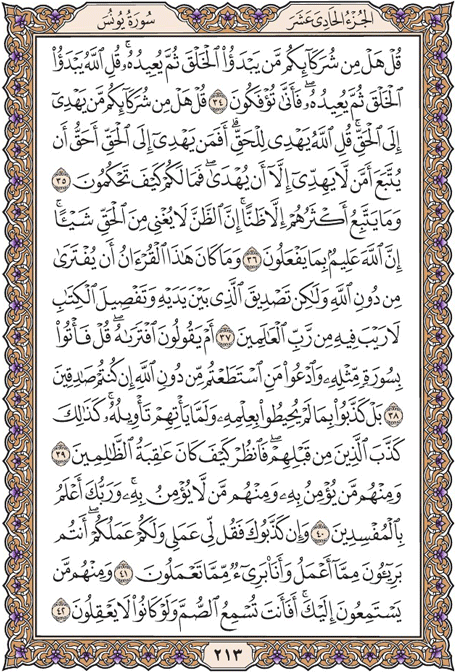 Ask: "Is there one among those you associate with God who can show the way to the truth?" Say: "It is God who shows the way to truth." Then who is more worthy of being followed -- He who guides to the truth, or he who cannot find the path until shown the way? What has happened to you that you judge in such a wise?

Many of them follow nothing but illusion; yet illusion cannot replace the reality. God verily knows what they do.

This Qur'an is not such (a writ) as could be composed by anyone but God. It confirms what has been revealed before, and is an exposition of (Heaven's) law. Without any doubt it's from the Lord of all the worlds.

Do they say (of the Prophet) that: "He has composed it?" Say to them: "Bring a Surah like this, and call anyone apart from God you can (to help you), if what you say is true."

In fact, they deny what is beyond the reach of their knowledge, whose explanation has not reached them yet. So had those who have gone before them denied; but look at the fate of the unjust

Some of them will believe in it, some will not. Your Lord knows the transgressors well.

If they (still) call you a liar, tell them: "For me my actions, for you yours. You are not answerable for my deeds, nor I for what you do."

Some of them listen to you: But can you make the deaf hear who do not understand a thing?