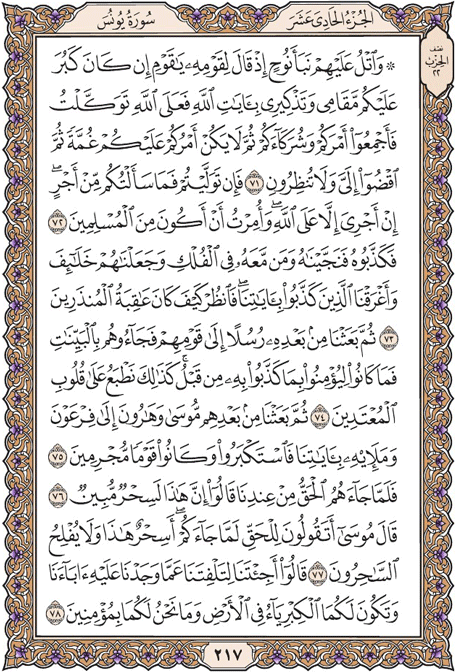 Recount to them the story of Noah when he said to his people: "O people, if you find my staying with you and warning through God's signs, unbearable to you, know that I have reposed my trust in God. So plan your move, and call your associates, and make certain of your plan; then do whatever you intend against me, allowing me no respite.

If you turn away from me (remember) I do not ask any recompense from you. My reward is with God; I have been commanded to be one of those who submit to Him."

Even then they denied him; so We saved him and those with him, in the ark, and established them in the land, and drowned those who denied Our signs. So think of the fate of those who were warned (and took no heed).

Afterwards We sent many messengers who brought clear proofs to their peoples. But they were not prepared to believe what they had once denied. That is how We seal the hearts of the iniquitous.

Then after them We sent Moses and Aaron with Our signs to the Pharaoh and his nobles; but they behaved arrogantly, for they were a people full of guilt.

Thus, when the truth had come to them from Us, they said: "Surely this is nothing but pure magic."

"You say this of the truth," said Moses, "after it has come to you. Is this magic? But sorcerers do not ever prosper."

"Have you come," said they, "to turn us back from what we found our ancestors doing, so that the two of you may attain supremacy in the land? We shall not believe in what you say.