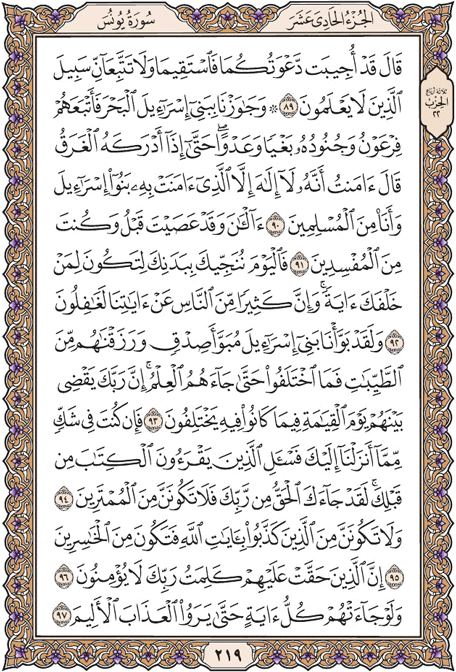 Said (the Lord): "Your prayer is answered. Therefore persist and do not follow the path of those who are ignorant."

"Yes, now" (was the answer), "though before this you were disobedient and rebellious.

We shall preserve your body today that you may be a lesson for those who come after you; as many a man is heedless of Our signs."

We gave the people of Israel a settled abode, and bestowed good things on them to eat and use. So they did not differ until they came to have knowledge. Your Lord will assuredly settle their differences on the Day of Resurrection.

If you are in doubt of what We have sent down to you, then ask those who have been reading the Book (for a long time) before you. The truth has indeed come to you from your Lord, so do not be one of those who doubt,

And do not be one of those who deny the signs of God, or you will be among the losers.

Verily those against whom the word of your Lord is pronounced will never believe,

Even though all the signs came to them, not till they face the grievous punishment.