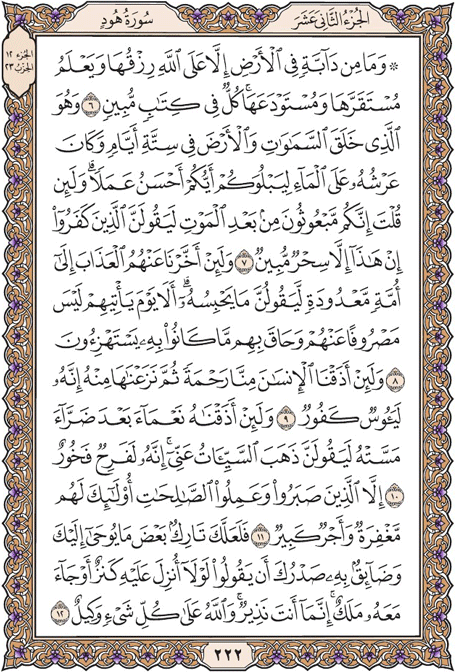 There is not a creature that moves on the earth whose nourishment is not provided by God, whose place of sojourning and depositing is not known to Him. All things conform to a manifest law.

It is He who created the heavens and the earth In six spans, and has control over the waters (of life) so that he may bring out the best that everyone of you could do. Yet if you said to them: "You shall certainly be raised from the dead," the unbelievers will say: "This will be nothing but sorcery."

If We defer their punishment for a certain time, they will say: "What is keeping it back?" And yet, the day it comes, they will not be able to avert it; and what they used to laugh at will encompass them.

If We allow man to enjoy Our favours, and then take them away from him, he becomes despondent and ungrateful.

If We let him taste Our favours after adversity, he says: "Misfortune has left me," and begins to brag and exult,

Except those who endure with patience and do the right, who will have pardon and a great reward.

You may haply omit some of what has been revealed to you, and may be disheartened because they say: "Why was no treasure sent down to him, or an angel accompanied him?" Yet you have been sent to warn alone, for God takes care of everything.