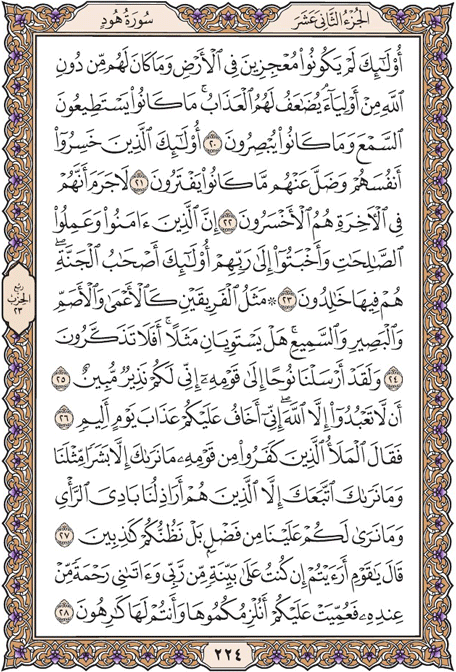 They shall not weaken (the power of) God on earth, nor find any other protector but God. Their punishment will be doubled, for they could neither hear nor see.

They are verily those who exceeded themselves, and the (gods) they invented abandoned them.

Undoubtedly they will be losers in the life to come.

But those who believe and do things good, and are humble before their Lord, are men of Paradise where they will abide for ever.

The semblance of these two groups is that of a man who is deaf and blind, and the other who can hear and see. Can they be equal? Why do you not reflect?

We sent Noah to his people (and he said): "I give you a clear warning.

Do not worship anyone but God; for I fear the punishment of a dreadful day for you."

The leaders of the people who were unbelievers, replied: "We see that you are but a man like us, and see that none among us follows you but the meanest and immature of judgement, and do not see any excellence in you above us. In fact, we think you are a liar."

He said: "O my people, think. If I have a clear proof from my Lord, and He has bestowed on me His grace, though unknown to you, can we force it upon you when you are averse?