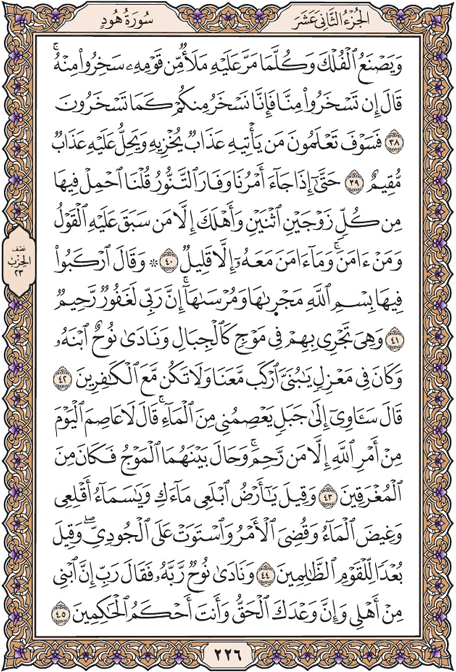 So he built the ark; and when groups of his people passed by him, they scoffed at him. He said to them: "Though you laugh at us (now), we shall laugh at you, as you are laughing at us.

You will soon come to know who suffers the punishment that would put him to shame, and who suffers lasting torment."

When Our command was issued and the waters gushed forth from the source, We said: "Take into (the ark) a pair of every species, and members of your family other than those against whom the sentence has been passed already, and those who come to believe." But only a few believed in him.

And (Noah) said: "Embark. In the name of God be its course and mooring. My Lord is surely forgiving and kind."

It sailed on waves like mountains (high), and Noah called to his son who was separated from him: "Embark with us, O my son, and be not one of those who do not believe."

"I shall go up a mountain," he said, "which will keep me from the water." "There is no getting away," said Noah, "from the decree of God today, except for those on whom be His mercy." And a wave came between them, and he was among those who were drowned.

Then it was said: "O earth, swallow back your water; and, O sky, desist." And the water subsided, and the decree was accomplished. The ark came to rest on Judi (Mount Ararat), and it was said: "Away with the cursed people!"

Noah called on his Lord and said: "O Lord, my son is surely a member of my family, and verily Your promise is true, as You are the most just of all judges."