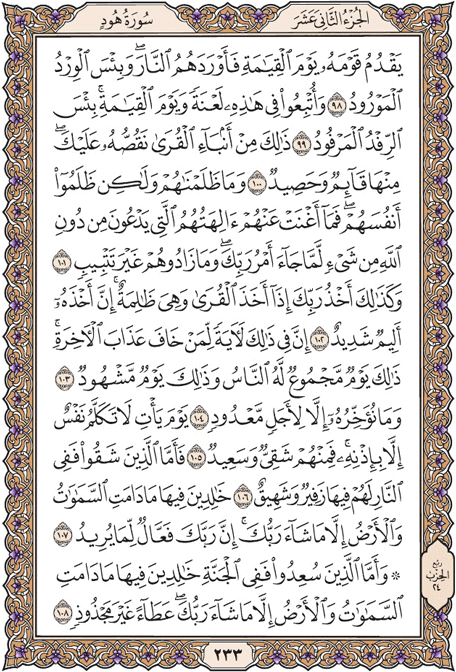 He shall be at the head of his people on the Day of Resurrection, and drive them into Hell like cattle driven to water -- what an evil watering-place to reach!

Damned will they be in this world, and on the Day of Doom how evil the gift that they will receive!

These are a few accounts of settlements that We narrate to you. Some still survive, and some have been mowed down.

We did not wrong them; they wronged themselves. When your Lord's chastisement descended upon them, their gods, on whom they called apart from God, were not of the least avail, and all they did was only to add to their destruction.

Such is the punishment of your Lord when He seizes human settlements in the acts of wickedness. Surely His hold is grievous and terrible.

In this surely is a sign for him who fears the torment of the Hereafter, the day when mankind will be assembled together, which will be a day when all things would become evident.

We are deferring it only for a time ordained.

The day it comes no soul will dare say a word but by His leave; and some will be wretched, some will be blessed.

And those who are doomed, will be in Hell: For them will be sighing and sobbing,

Where they will dwell so long as heaven and earth endure, unless your Lord will otherwise. Verily your Lord does as He wills.

Those who are blessed will be in Paradise, where they will dwell so long as heaven and earth survive, unless your Lord wills otherwise: This will be a gift uninterrupted.