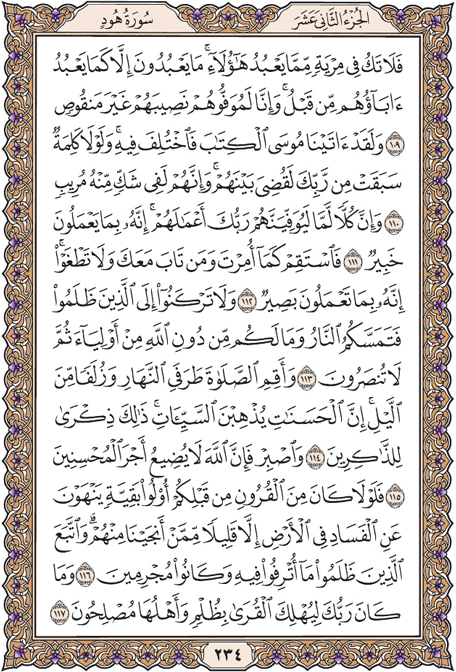 So, you should not entertain any doubt about those whom they worship: They only worship what their fathers had worshipped before them. We shall verily give them their meed without diminution.

Verily We gave to Moses the Book, but there was disagreement about it. Had the decree of your Lord (delaying it) not been issued the matter would have been settled between them. They are still suspicious of it and in doubt.

Surely your Lord will reward everyone in accordance with his deeds. He is certainly aware of all they do.

So, you and those who turned to God with you, should walk along the straight path as you have been commanded, and do not transgress, for He verily sees whatsoever you do.

Do not lean towards the wicked, or you will be caught in the flames of Hell, and have none to befriend you other than God, nor will you be given help.

Stand up for the service of prayer at the two ends of day and the first watch of night. Remember that good deeds nullify the bad. This is a reminder for those who are observant.

Be steadfast, for verily God does not let the reward of those who are upright and do good to go waste.

If only there had been men endued with virtue in the ages before you, who could preserve men from doing evil in the world, other than the few We saved from among them. Those who were wicked followed that which made them dissolute, and became sinners.

Your Lord would not surely destroy unjustly human habitations so long as the people are righteous.