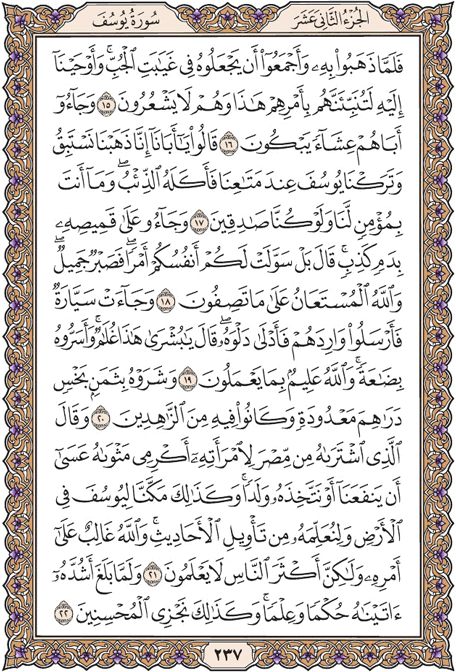 So, when they took him out they planned to throw him into an unused well. We revealed to Joseph: "You will tell them (one day) of this deed when they will not apprehend it."

At nightfall they came to their father weeping,

And said: "We went racing with one another and left Joseph to guard our things when a wolf devoured him. But you will not believe us even though we tell the truth."

They showed him the shirt with false blood on it. (Their father) said: "It is not so; you have made up the story. Yet endurance is best. I seek the help of God alone for what you impute."

A caravan happened to pass, and sent the water-carrier to bring water from the well. He let down his bucket (and pulled Joseph up with it). "What luck," said the man; "here is a boy;" and they hid him as an item of merchandise; but what they did was known to God.

And they sold him as worthless for a few paltry dirham.

The Egyptian who bought him instructed his wife: "House him honourably. He may be of use to us. We may even adopt him as a son." So, We firmly established Joseph in the land, and taught him the interpretation of dreams. God dominated in his affairs, though most men do not know.

When he reached the prime of life We gave him wisdom and knowledge. Thus We reward those who are good.