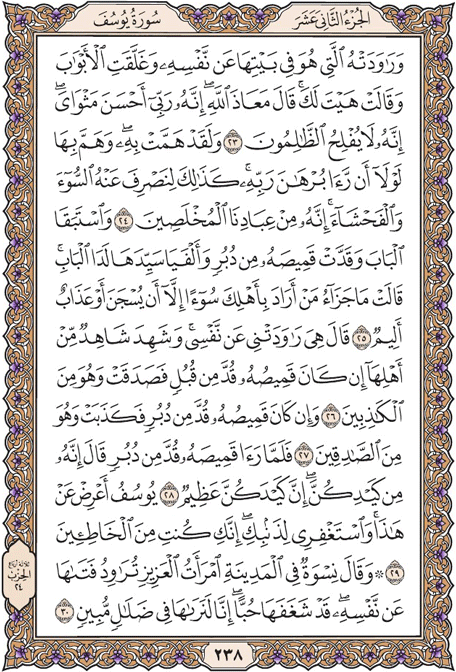 But she in whose house he resided wished to seduce him and, closing the doors, said: "Come into me. "God forbid!" he said; "he is my master who has approved my stay. Surely those who act wrongly do not prosper."

But the woman desired him, and he would have desired her but for the indication he received from his Lord. This was so that We may avert both evil and lechery from him, for he was one of Our chosen devotees.

Both of them raced to the door, and she (grabbed and) rent his shirt from behind. They met her lord outside the door. "There is no other penalty for a man," said she, "who wanted to outrage your wife but imprisonment or grievous punishment."

(Joseph) said: "It was she who wanted to seduce me." And a witness from her family testified: "If the shirt is torn from the front then the woman is speaking the truth, and he is a liar.

But if the shirt is torn from behind then she is a liar, and he speaks the truth."

When the husband saw the shirt torn at the back, he said: "Surely this is a woman's ruse, and the wiles of women are great.

Ignore this affair, O Joseph; and you, O woman, ask forgiveness for your sin, for you were surely errant."

In the city the women gossiped: "The minister's wife longs after her page. He has captured her heart. We think she is in clear error."