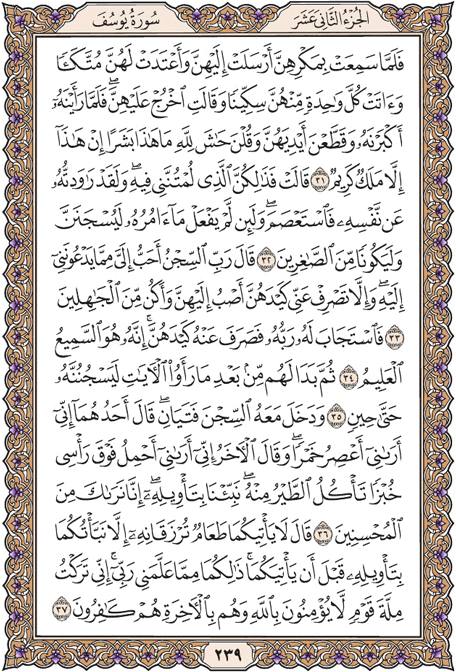 When she heard their slanderings, she sent for them and prepared a banquet, and gave each of them a knife (for paring fruit), and called (to Joseph): "Come out before them." When they saw him, the women were so wonderstruck they cut their hands, and exclaimed: "O Lord preserve us! He is no mortal but an honourable angel."

She said: "This is the one you blamed me for. I did desire his person, but he preserved himself from sin. Yet in case he does not do my bidding he will be put into prison and disgraced."

(Joseph) prayed: "O Lord, dearer is prison than what they invite me to. Unless You turn their guiles away from me I shall succumb to their charms and thus become a pagan."

His Lord heard his prayer, and averted the women's wiles from him. He verily hears and knows everything.

And yet in spite of having seen these clear proofs they found it proper to incarcerate him for a time.

(Joseph) answered: "I will give you its interpretation before the food you are served arrives. This knowledge is one of the things my Lord has taught me. I have given up the religion of those who do not believe in God and deny the life to come.