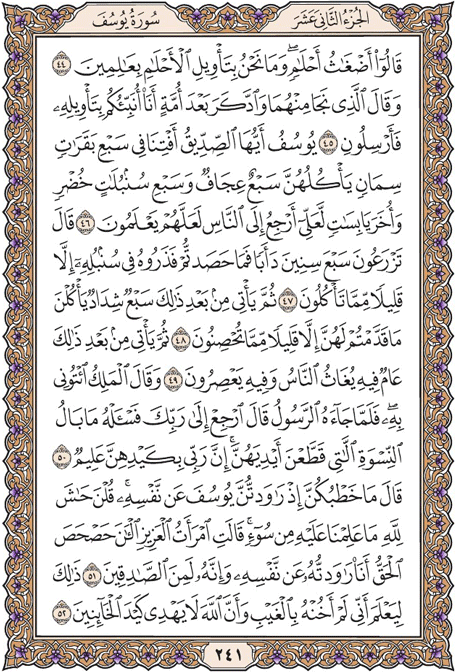 "They were only confused dreams," they said; "we do not know how to interpret them."

Then the servant, who of the two had been released, remembering (Joseph), said: "I will give you its interpretation; let me go for it."

(And coming to the prison) he said: "O Joseph the truthful, tell us (the meaning of) seven fat cows being devoured by seven lean ones, and seven green ears of corn and seven seared, that I may go back to the people and tell them."

He said: "Sow as usual for seven years, and after reaping leave the corn in the ears, except the little you need for food.

Then there will come seven years of hardship which will consume the grain you had laid up against them, except a little you may have stored away.

This will be followed by a year of rain, and people shall press (the grapes)."

The king said: "Bring him to me. So when the messenger came to Joseph, he said: "Go back to your lord and ask him: 'How fare the women who had cut their hands?' My Lord is cognisant of their guile."

The king asked the women: "What was the affair of seducing Joseph?" "God preserve us," they said; "we know no evil against him." The wife of the minister said: "The truth has now come out. It was I who desired to seduce him, but he is indeed a man of virtue." --

(At this Joseph remarked:) "From this (the Minister) should know that I did not betray him in his absence, and that God does not surely let the wiles of those who betray ever succeed.