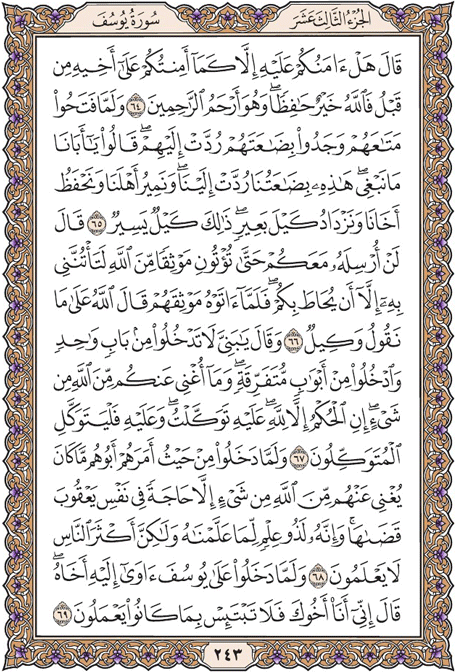 He replied: "Should I trust you with him as I did his brother? But God is the best of guardians, and most merciful of all."

When they unpacked their goods they said: "O father, what more can we ask? Look, even our money has been returned. We shall go and bring a camel-load more of grain for our family, and take good care of our brother. That will be an easy measure."

He said: "I will never send him with you until you swear by God that you will bring him back to me, unless all of you are overtaken (by misfortune)." When they had given their promise, he said: "God is witness to our conversation."

(As they were leaving) their father said to them: "O my sons, do not seek one approach but employ different ways (of attaining your object). If anything should befall you from God I shall not be able to avert it, for all authority belongs to God. I have placed my trust in Him, and the trusting should rely on Him alone."

When they entered as their father had advised them, nothing could avail them against (the will of) God, yet it confirmed a premonition Jacob had, for verily he had knowledge as We had taught him, though most men do not know.

When they came to Joseph he made his brother his guest, and said: "I am your brother. So do not grieve for what they had done."