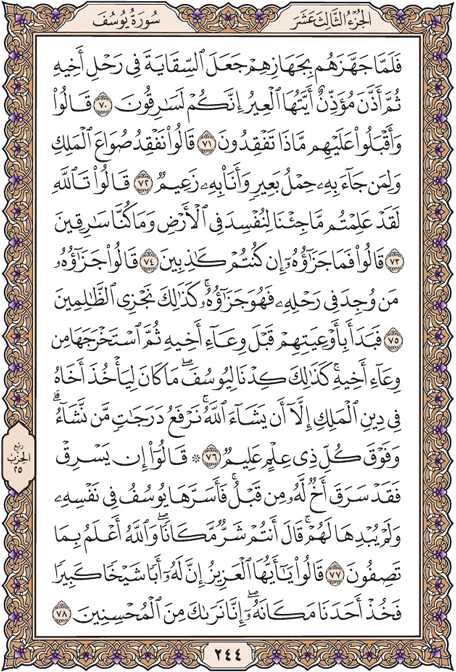 When he had given them their provisions he put his goblet in his brother's saddle-bag. Then a crier announced: "O men of the caravan, you are thieves."

They turned to them and asked: "What is it you have lost?"

"We cannot find the master's goblet. Whoever comes up with it will be given a camel-load of grain; I vouch for it."

They said: "We swear by God. You know we did not come to commit any crime in the land, nor are we thieves."

"What should be the punishment," they were asked, "in case you are liars?"

"The punishment for that (should be)," they said, "that he in whose luggage it is found should be held as punishment. This is how we repay the wrong-doers."

So he searched their saddle-bags before his brother's, then produced the cup from his brother's bag. That is how We planned an excuse for Joseph, for under the law of the king he could not detain his brother unless God so willed. We raise the status of whom We please. Over every man of knowledge there is one more knowing.

Said the brothers: "If he has stolen (no wonder), his brother had stolen before." But Joseph kept this secret and did not disclose it to them, and said (to himself): "You are worse in the degree of evil, for God knows better of what you allege."

They said: "O Minister, he has an aged father, so keep one of us in his place. We see you are a virtuous man."